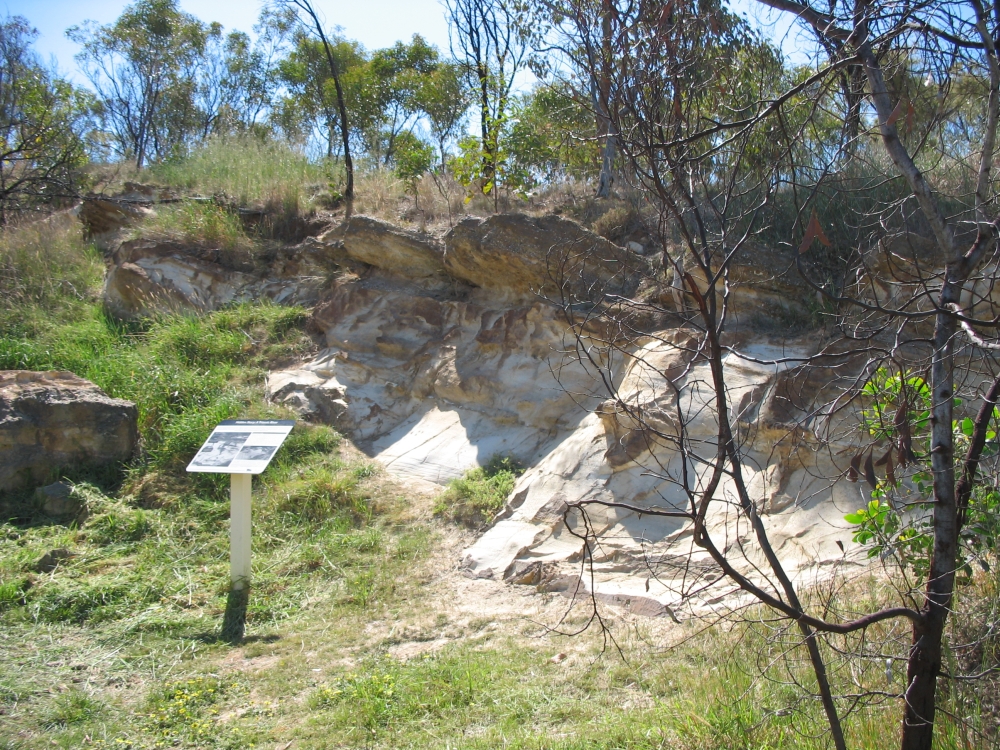 In 1873, a small quarry was opened in its sandstone to check the deposit's usefulness as a building stone. The stone was found to be of inferior quality, but the quarry and its surrounding land were gazetted as a stone reserve.

From 1873, through the discovery of Triassic-aged plant fossils in its rock in 1892, and until 2000, the Council Trench site remained a public reserve. It was largely unknown to the general public but important to geologists and students as a study site. The Victorian Branch of the Geological Society of Australia (GSA) recognised the site's significance in the 1980s. In 2000, despite its geological heritage significance, the Victorian government offered the site for private sale and development.

A dedicated working group from 2000 to 2003 laboured to have the government's offer of sale withdrawn and ensure that the site remained in public ownership. They were successful, and Bacchus Marsh Council Trench Reserve Incorporated was formed and appointed as a Committee of Management (COM) to manage the site. The successful lobbying by a dedicated group to prevent a geological heritage site from being sold for development and to have it declared a Crown Land Reserve might represent the first occasion that such action has been undertaken in Victoria.

In its Management Plan of 2004, the COM listed 5 goals for reserve management:

These goals are being observed to the present day. Ongoing tasks on the reserve for COM volunteers are grass mowing, weed eradication, replanting the native flora and annoying the rabbits!

The reserve lies on the southern slopes of Bald Hill and is entered from Tramway Lane. Its location can be found at Melway 333, C3. The Triassic rock exposure in the Trench walls is a short walk from the entrance. A pathway up the slope passes through Grassy Woodland and Rocky Chenopod Woodland. Three interpretive panels/signs are found along the path that ends at the top of the ridge with a superb view overlooking the Basalt Grasslands and Bacchus Marsh Valley, the Korkuperrimul Creek, and the rolling hills to the west. A short climb to this rewarding panorama is an attractive prospect! Unfortunately, the pathway is unsuitable for wheelchair access.

An important aim of the Bacchus Marsh Council Trench Reserve COM is to promote and educate citizens about the natural values of the reserve. To this end, COM volunteers work with the Moorabool Shire through information programs centred on the Lerderderg Library. Each October, geological samples, maps, and photographs featuring local geological themes are displayed during Earth Science Week. In addition, our geologist COM members volunteer to speak at the Saturday morning BacchChat forums at the library.

Triassic Park, a 5 minute video presentation made by the COM, outlines the geology and history of the Reserve. This is on Vimeo and can be found on the GSA, Victoria website. The video, produced by a volunteer professional, is an interesting and informative part of the COM's community involvement.

During the COVID-19 restrictions of 2020, individual COM members, each working in isolation, prepared segments of the story for the 20-minute video of the Permian Great Ice Age in Bacchus Marsh. Segments were collected and shared via 'Dropbox'. Community support staff at Moorabool Shire's Lerderderg Library combined these were combined to produce the video. The video went online on the Moorabool Shire website during October/November 2020 as part of the celebration of Earth Science Week 2020.

Permian glacial sandstone has been an important material to build the Old Treasury Building in Melbourne, a local church, the Bacchus Marsh courthouse, and local bridges and houses. In addition, the Permian Period's 280 million-year-old history, when the entire southern Australian landscape was covered in a massive ice sheet, is an integral part of the geological history of Bald Hill and the later, warmer, Triassic Period history of the Council Trench Reserve.

This story was supplied by the CoM in 2021 and edited by DELWP staff member Michael Gourlay prior to publication. Four members of the committee, Roger Pierson, Susan White, Mel Mitchell and Alan Morton received Volunteer Recognition Awards in 2021.